The Death of Debate and Discourse

We all know the danger of truly Fake News, which can spread as quickly as wildfire, but what happens when fake debate and discourse happens? 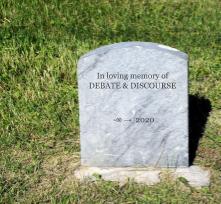 Just as with the wildfires in real life, the spread of misinformation and misrepresentation of facts is only increasing. Political climate change is very real, and a result of its birthing pains is this election. Where one side of the ticket is seen as a chance to “return to civility” and the other as “draining the swamp.” One mantra is “Settle for Biden,” and the other is still “Make America Great Again.” I believe that the advent of social media has killed the art of debate and replaced it with the need for social media savvy.

First off, what is Fake news? No, I’m not referring to the politically-charged term that is typically used by the current administration, but rather objectively false news – information and headlines that aren’t true. According to a Stanford research piece, 62% of adults get their news from social media. Additionally, they stated that “the most popular fake news stories were more widely shared on Facebook than the most popular mainstream news stories.” On top of this, the study found that most adults believed the message they were being told, even if it was false.

Of course the phrase “Don’t believe everything you see on the internet” applies, but so does, “If your friends jump off a cliff, would you?” Social media is the breeding ground of peer pressure, and not only for looks now. What other people believe and share is contributing to the increasingly polarizing environment that is  American politics.

Additionally, there is the often-overlooked topic of misrepresentation. While some still classify this as “Fake news,” or misinformation, I think it is far more dangerous. Unlike misinformation, misrepresentation takes objectively correct  statements or facts and ties it in with subjective opinions or even other unproven information. It twists the truth to cater to an audience. It is harder to disprove and refute misrepresentation because, often, the fact it is based on is true. A recent example comes from Trump himself.

In a political ad, Dr. Fauci’s words supposedly endorse Trump. However, Fauci came out and said he has not publicly supported either presidential candidate. While this issue may be highlighted this year, it has always been an issue with politics. Back in 2012, there were multiple ads, from both the Obama campaign and the Romney campaign, using each other’s words out of context.

Additionally, Foreign adversaries have used the sect of Fake News to cause further damage. Russian hackers accessed Biden’s email and took several very real emails and edited and added text and information that was not there before. While Trump claims that this proves that Biden is corrupt, Biden uses it to show that Trump is siding with a foreign enemy. Neither side has concrete evidence of their position, so it is left up to the biases of whoever hears the news to decide.

I personally believe that Russia does not favor a candidate in the United States election, if it causes great amounts of polarization and distrust of “the other side.” Russia wants our democracy to fail so that they can be the nuclear powerhouse of the world without fear of mutual destruction.

Amongst all the misinformation, is there still an audience for facts? Not for much longer. This election has shown that outrage is more popular than genuine support. I would dare to say that much of Joe Biden’s support comes from outrage over Trump’s presidency rather than exclusive support for Biden’s policies.

Additionally, Fake News has latched its success on the evolving and personal algorithm social media provides. We all feel creeped out when we look on Amazon for a product and the next 5 ads we see on Instagram are all that same product. In the same way, our biases and preferences are exploited on social media. Be wary when all the information you absorb is from one perspective. It gives people the illusion that they are in the majority or often in “the right,” when they are not. There are “right” and  “wrong” stances on topics, but simply surrounding yourself with what you believe blinds your perspective. Even if you know something is wrong, being familiar with it empowers you when you debate or discuss a topic.

Being able to surf the web with literacy is the most important life skill we can learn. The waves of political discourse on the internet are only rising with the political climate change we are witnessing. Ninety-Percent of 18-29 year olds are on social media. No coincidence that many political organizations are flocking to social media to reach the new batch of voters.

Keep vigilant and stay educated. We could choose to be influential or influenced. We could change the world or have it change us.